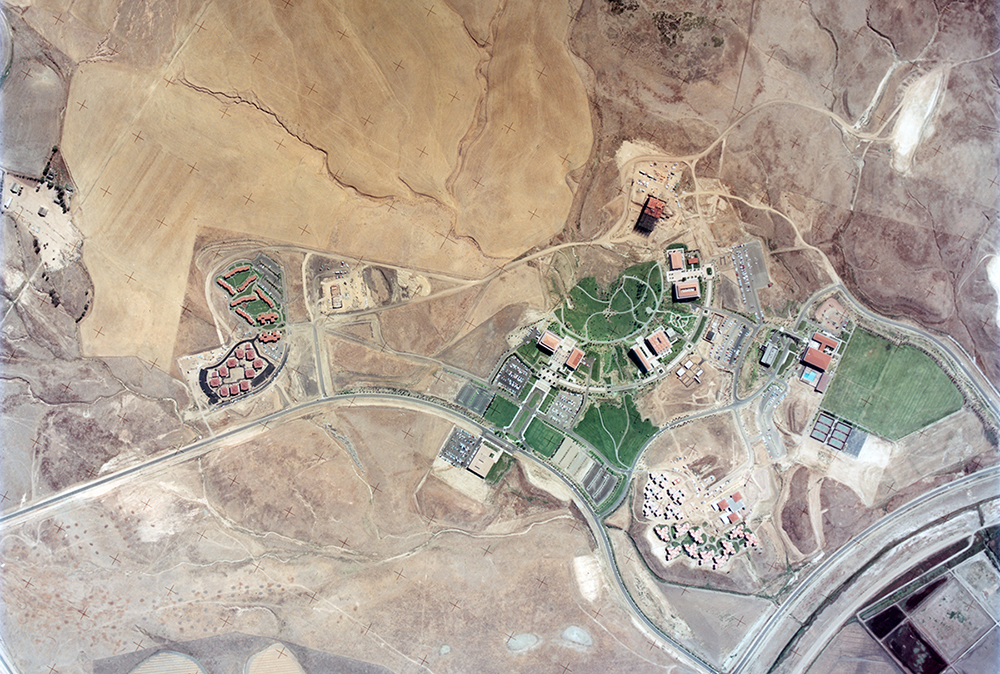 I was 21 years old when I started working at UCI’s storehouse and receiving department in February 1968. Over the years, I worked in the mailing division, environmental health & safety, and telecommunications. I retired June 29, 2009 – a total of 41 years.

When I began working at UCI, the starting pay for my position was $389 per month. All of my jobs at UCI were service-oriented and allowed me the flexibility to travel around the campus. It gave me a unique perspective on the development around the UCI campus community.

In the campus’s first 10 years, UCI was transformed from rolling hills and grassland to a first-class university. Staff contributed a great deal in this journey.

In 1968, the campus was small and intimate. As I remember it, the entire campus was made up of North Campus, the first phase of Verano Place and Mesa Court student housing, Shellmaker Island, Crawford Hall, the Central Plant, the grounds trailer complex, the Natural Science building, the Science Lecture Hall, the Headhouse-Greenhouse, the Computer Science Trailer, Humanities Hall, Humanities Tower, the Humanities Courtyard trailer complex, Gateway Commons, the Main Library and the UCI Farm.

At the time, the inner and outer rings of what is now Aldrich Park were only partially complete. Construction was at a fever pitch during the first 10 years, making it extremely difficult to navigate around campus.

There were herds of bison, cows, goats and sheep to keep grass and weeds at a manageable level in what is now University Hills. I 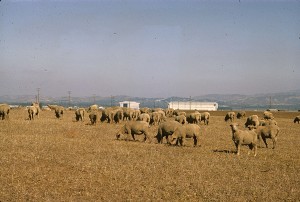 t was lovely watching these animals go about their daily business.

One of the beautiful features of UCI was the cherished entrance to the school off Campus Drive. It allowed one to drive into UCI directly, circle the flagpole, and continue on the road. There was a mild protest when Campus Drive later became a four-lane divided highway. When Campus Drive was extended across the marsh to Jamboree Boulevard, there was a huge outcry of opposition due to possible damage to the wildlife habitat.

About three months after I began work at UCI, I decided to visit the campus at night. When I arrived, I developed a severe case of spatial disorientation. The campus had a different feel to it at night. For the first time, I became aware that there were no telephone or power poles on the streets.

All the campus utilities were located underground in the tunnels. The university used to offer tours of the tunnel system. However, if you get a chance to circumvent the campus in the tunnel complex, do so at your own peril. Some parts of the tunnels are very spacious, but other parts are extremely small, requiring anyone over 6 feet tall to stoop down to make it through.

Back in the day, Chancellor Dan Aldrich knew and addressed all employees by their first name. I would often see Dan walking in the park, sometimes carrying a bucket and a pair of snips to pick up trash. He would also prune the sapling trees, many not even as tall as him.

One day, I scolded him about picking up trash.

“You have grounds people to do this,” I said.

His response was, “I know, Jack, but this is my campus.”

He went on to tell me that before becoming chancellor, he was an agriculture and horticulture scientist.

There was a tiny airstrip, or runway, on the land that is now home to University Research Park. It had the same compass orientation as Orange County Airport (John Wayne Airport) and was bordered by University Drive, MacArthur Boulevard, Bison Avenue and California Avenue.

The airstrip was built and maintained by the U.S. Army during World War II. After the war, the tiny blacktop airstrip was decommissioned by the Army and used by private pilots. It was completely abandoned by the late 1950s.

I learned about the airstrip from Donald Stipp, a UCI mail room co-worker and private pilot. In the late 1960s and early 1970s, Don would rent an airplane from Orange County Airport, and we would go flying during an extended lunch hour. The two of us flew over this airstrip quite a few times on our way to and from the ocean. We walked on it at least once. It was quite visible from the air even though it was in poor condition. 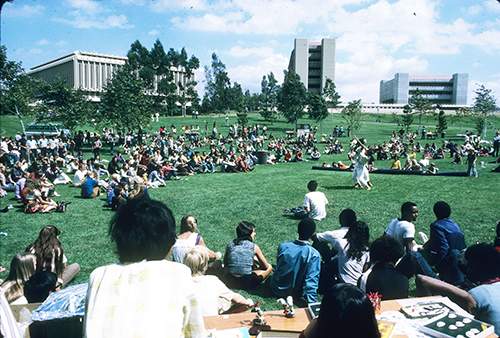 In the spring of 1971, the Associated Students of UCI launched the first Wayzgoose and Celebrate UCI event. It was heavily advertised. I must say that the first Wayzgoose was very scary to me as a minority kid from Pittsburgh. Never had I seen anything like it. Participants dressed in medieval and Renaissance period costumes and acted in character. It scared the crap out of me! I had nightmares each night for a week after attending Wayzgoose. Of course, next year I was back for more fun. 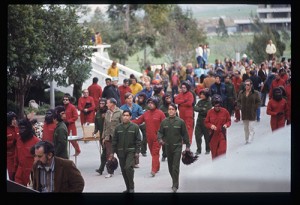 When filming began for “Conquest of the Planet of the Apes” in 1971, it electrified the campus. It was like a giant monster had put a huge electrical plug into the UCI campus community. There was magic in the air. Supervisors let their employees take extended lunch hours to watch the filming. Some employees even used vacation time to watch.

I would be remiss if I didn’t talk about the development of the Turtle Rock and Culverdale housing tracts and how their development affected campus life. Most faculty and staff at UCI talked about purchasing one of these charter homes. I believe the initial asking price for a 1,000-square-foot, two-bedroom, detached family home in Culverdale or Turtle Rock was about $11,500. We were in shock and awe as we watched the asking price go up at least a hundred dollars or more every week.

I did not qualify to purchase one of these homes. Although my salary had risen to $605 a month and I had an excellent credit rating, the minimum income requirement to buy a Culverdale or Turtle Rock house was $850 a month. I would have qualified had I attended college and used my GI Bill benefits of $300 a month. If only I had known.

At one time, the UCI mail room was housed on the first floor of Aldrich Hall. This required the installation of a hydraulic lift on the sidewalk for the unloading and loading of mail. Eventually, space concerns became an issue, which caused the mailing division to move to North Campus. The hydraulic lift outside Aldrich Hall was removed, and the hole in the sidewalk was filled with cement. The temptation was too great to pass up. At least nine of us wrote our initials in the fresh slab of concrete. The initials belonging to me (JCL) are dated Feb. 8, 1980, and are fading fast. Take a look at them next time you’re in the area. They’re on the sidewalk west of Aldrich Hall, across from the bookstore. 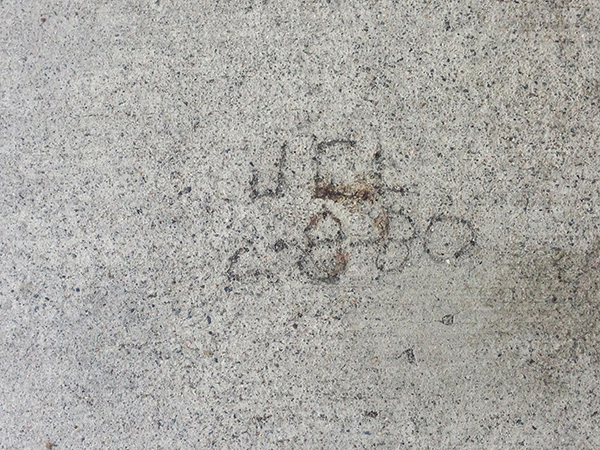