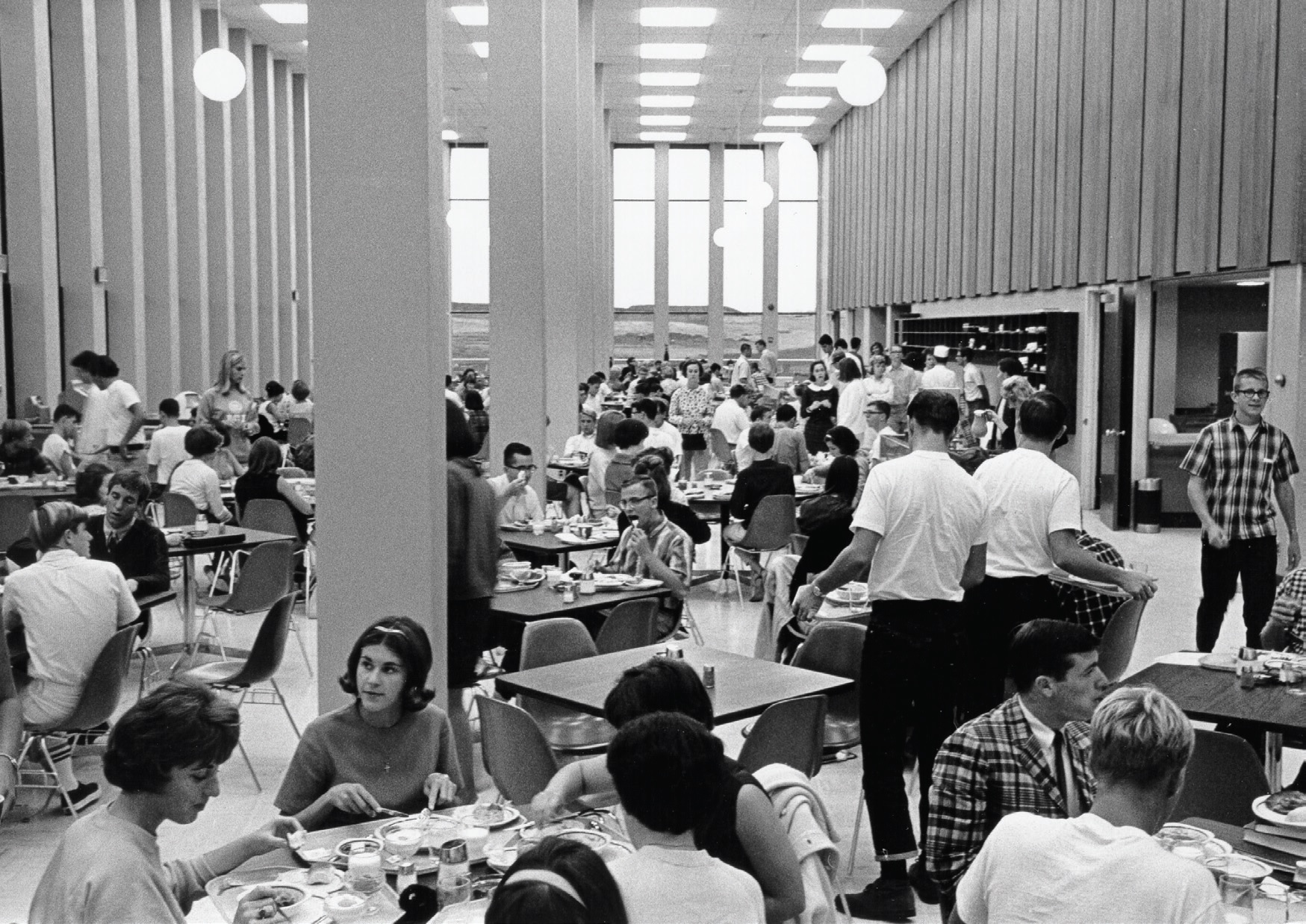 The first class I attended at UCI, in the fall quarter of 1973, didn’t meet in a classroom. Though the university had officially opened in 1965, much of the campus was still on the to-do list. Some classes and instructors’ offices were situated in trailers in muddy fields adjacent to William Pereira’s stolidly futuristic buildings.

My class, a study of utopian societies, was one of the lucky ones. Instead of a corrugated trailer, it was held in the lobby/lounging area of one of the dorms.

Some students found a couch or chair. Most of us sat on the floor, discussing Butler’s Erewhon and Huxley’s Island while the occasional dorm-dweller walked by in her pajamas.

For our final paper, each of us had to plot out our notion of a workable utopia. I based mine on Disneyland, and it went like this: Everybody worked the park one third of the day; enjoyed the park one third; and slept for one third. Yeah, I figured, I could probably handle this university stuff.

The idea wasn’t much of a stretch. To see a palpable little version of utopia, one had only to view Disney’s miniature “city of the future” displayed on the way out of the Carousel of Progress attraction. It was a dandy of a town, ultra-clean and yet merging with nature, everyone getting to their purposeful miniature jobs via monorail or aerial tramway. Outside, much of Disneyland was like that: functional, immaculate and tilting toward a great big beautiful tomorrow.

The future was like that then, not the dusty dystopias that have darkened our popular culture since Blade Runner and Mad Max hit the screens. It was a given that each generation would fare better than the one before it.

Knowledge would accrue and draw us together. The atom was our friend.

Like Disneyland, UCI, with its space-waffle buildings, was an outpost of a hopeful future. It was imagined as a hub that would attract a community of the brightest and best to it, and their attendant neighborhoods and businesses as well. It was the Irvine Company casting its seed upon the empty ground (it sold 1,000 acres to the state for $1) and waiting for a city to sprout. When it did, it would be a master-planned one—also designed by Pereira—which was a utopian idea of a sort, a reasoned antidote to the random sprawl of most burgs.

I’d drive past Pereira’s offices on my way to UCI. They were in a converted Irvine Ranch ranch house near where I lived in Newport’s Harbor View Homes. Despite the rustic workplace, the master architect was nuts about science fiction, and it showed. He designed the Disneyland Hotel, LAX, the original OC Airport terminal, Newport Beach’s old civic center, TV studios, jet testing labs, IBM’s headquarters and San Francisco’s Transamerica Pyramid, all doing their part to make sure the future looked like the future.

I didn’t go to UCI for its looks, nor for its academic standards, which can’t have been too high back then, since I got in. I went because it was the college closest to my home, and college seemed the likeliest path to forestall having to join the adult world for a few years. I was thinking hippie thoughts then, and couldn’t imagine ever fitting into the money-driven workaday corporate life.

I know many people who have graduated from UCI and become successful movers and shakers in a number of fields. The great thing about UCI back then was that its curriculum was so rich, varied and questing that a person like me was also able to emerge from it after 3½ years singularly unqualified to be of use to any prospective employer. Cast into the adult world regardless, I had little recourse but to become a writer.

I’m not being snide here. To me, one of the great hallmarks of a liberal arts education is that it’s not based solely upon teaching you things that can be readily monetized. I certainly could have learned those things at UCI as well, had I stuck with a curriculum or major. Not a bad deal for the $235-perquarter cost then.

Instead, I almost exclusively signed up for classes with titles that interested me. Whenever a faculty advisor caught up with me to warn that I hadn’t taken any of the required core courses, I’d switch majors.

So I took Utopias and Planned Societies, Existentialism in Literature (I received an F on my final paper, but an A for the cover, where I put Camus’ Meursault in a Charles Atlas ad), read Joyce and other grand writers, and in a sociology class learned how to apply Erving Goffman’s Frame Analysis theories to pranking local discothèques.

I took Human Sexuality in the Science Lecture Hall, where the conservatively suited professor once stood on a countertop so his pointer could reach the projected diagram of the male reproductive system. He looped the pointer around the seminal vesicles and then, to highlight the climactic moment, took a dramatic running leap off the end of the counter.

I’d spent a lot of time in the Science Lecture Hall before I even attended UCI, going with friends from Corona del Mar High School to see a series of surrealist films, including Buñuel and Fellini masterworks we might never have seen otherwise.

That same hallowed hall was also home to the king UCI class of all time, the Sociology of Horror Film. It was taught by William C. Watt, a stentorian bearded figure with the presence of an Orson Welles. He could rattle off a lecture of high-octane blarney for 45 minutes and have everyone in that 450-seat hall transfixed.

It was different when the lights went out. While watching B-grade horror flicks like Blackula and Count Yorga, Vampire, we’d be watching for the sociological mechanisms and tropes that caused audiences to respond. We’d also be getting high.

When too much Thai smoke filled the room, and empty Boone’s Farm bottles were clanking down the steps, the film would halt, and that stentorian voice would ring out in the darkened hall, “OK, cut out all that horsesh*t!” Things would tamp down for a while, and we’d go back to searching for examples of “Bava’s Busy Foreground” in Italian monster films. This was not surprisingly the most well attended class on campus. For the final paper, friends and I got away with turning in Boca de la Vaca, a 12-minute vampire film with a lot of unexplained milk imagery.

We didn’t have to go far to film some cows. The Irvine Company was grazing cattle right across the street from the campus. Another thing I learned at UCI: Cows with big horns are not cows, and they will chase you.

The campus has always been great for providing enriching extracurricular activities, whether it was Tom Waits in Crawford Hall, the Mystic Knights of the Oingo Boingo in the campus’ little Patogh coffeehouse, or the panoply of great things the Irvine Barclay Theatre has since dished out. The radio station, KUCI, was as akimbo in its programming 40 years ago as it is now. (My favorite sweep of current shows starts Mondays at 10 a.m., with the best blues show in the county, followed by a couple of hours of North Korean military marches and such, followed by video game music.)

I will cop to having learned useful things in my years there. UCI had a small but mighty writing department, where I learned a lot about fiction writing from Oakley Hall and even more about journalism from Joe Bell.

Both were no-nonsense guys who were kind and encouraging enough to take nonsense from me. Whatever urge to write I had back then was overwhelmed by a near-pathological inability to meet deadlines. They saw something in me that I didn’t, to the point that Oakley once just asked me what grade I needed to rescue my GPA and told me to get my story to him over the summer sometime. It’s only fitting that I wound up in a profession that’s one unforgiving deadline after another.

Joe had been a fighter pilot trainer in WWII, and as a journalist had covered a lot of the major people and events of the ’60s. He would boil about the frivolity that took over campus life in the ’70s. The decade had started off pretty heated, for better or worse, with anti-war protests and an ugly campus bookstore strike. By 1974, on-campus activism had devolved to hairy-ass guys streaking naked through the commons.

The university survived that, just as it has flaps over the flag and attacks from local columnists who seemed convinced they understood how climate change affects our future better than UCI’s Nobel-winning Sherry Rowland.

Oh, yes, the future. From the vantage of the 1970s, we’re living in the future now. From our current vantage, UCI’s futuristic architecture now looks ever so 1960s. Today, we don’t even pretend to know what the future looks like, but when it arrives I’m guessing it will come from places very much like UCI, my old alma mater.