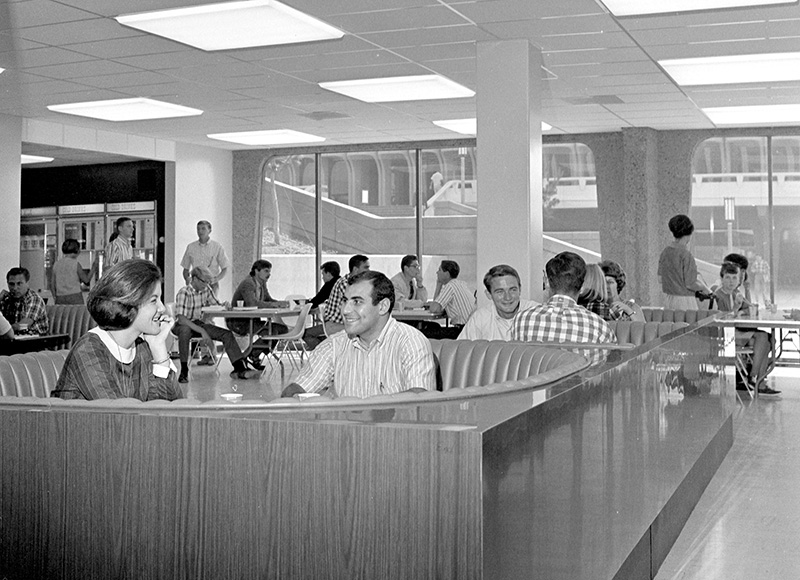 There was only one place to buy lunch in the early days, so professors and students were together in the dining commons at the same time. A bookworm and introvert by preference, I usually ate alone with a book open on my lap. Doing so enabled me to hear what the professors at a nearby table were discussing:

“What exactly is a university?”

“No, it is not just a gathering of teachers and students.”

“What does the term mean in Europe?”

“It’s a gathering place for the intellectually honest to pursue truth.”

“Why did painters from all over the world move to Paris during the 1800s? To improve their art, and there – where art reigned supreme – it could progress.”

A curious thing happened after I turned in a lengthy term paper on poetry. Because the style of the opening paragraphs was more refined than the closing pages, my regular English professor thought that someone else might have written the beginning, so he called me in to talk about my paper. He learned that I had been attending more than my assigned English class. I told him that I had stayed up until about 4 in the morning revising and typing the paper in question. So by 4 a.m., I was too tired to compose sentences fittingly. He believed me. Those were all great professors. We felt they were on our side.

Anteaters develop grit. I remember the discussions and letters to the editor in the school newspaper when students were selecting a school mascot. We did not want a tiger or any ferocious beast to represent us. Many other universities felt our mascot [an anteater] was ludicrous, but we didn’t care.

Since I was a French major and there were not very many books on French language and literature at the UCI library in the 1960s, I would ride a complimentary shuttle north to use the UCLA library about once a month.

I also kept busy in student government. I was on the student senate during those formative years on campus – also on the Honor Code Committee for two years. You might ask, “Why did an honor code take two years?” In part because we wanted to research what other universities were doing to promote intellectual honesty. Chancellor Daniel Aldrich wanted our university to become a primary research facility. He and the professors during those first years decided to include the concept of “honor” in a variety of classroom discussions. I remember having to write a paper for an English professor on the concept of honor as presented in a novel by [Henry] Fielding.

One mile from UCI in 1965 was a rented house that my sister and I shared with a couple of other UCI girls. Now that I am a grandma, looking back, I can see that because we were pretty much alone, we had to rely on each other and formed good bonds of friendship. Our mothers had gone through the same process living near UCLA while waiting for their husbands to return from World War II. The poverty and fears and determination other generations have experienced are still somewhat a part of UCI life. Because about 40 percent of the current student body come from middle-class or lower socioeconomic status, they turn to each other for help and resources. Anteaters develop grit.

In the early years, there were hardly any off-campus centers for socializing. My sister, our friends and I decided to go to the little Christian center classes being held in a trailer at the Irvine Town Center. Our teacher challenged us to “live the Sermon on the Mount with each other.” We talked about the injunction to “love your enemies.” We made promises to “be friends, no matter what.” After all, the term “enemies” does not refer to people in a different country. It refers to a sister who borrows your sweater and then does not wash it or put it back.

To help make ends meet, I had taken a part-time job cleaning some rental units managed by a senior at UCI. She had transferred from UC Santa Barbara so she could live at her dad’s place and manage his rentals. Since I had no car, she drove me home after work one afternoon, and a friend of hers was sitting in the back seat. I could tell by their [conversation] that she had provided him with some LSD so he could try it out. In those days, psychedelic experimentation was more common because scientists had not yet discovered how damaging it could be.

Torn by feelings of loyalty to her as a friend and my own determination to build an excellent university, I did not know what to do. During our classroom discussions of honor, we had come to the consensus that if we wanted to live in an ethical society with high morals, then we must speak up when we see misbehavior. I thought of how difficult it must have been for my English teacher to confront me when he suspected me of possible plagiarism. Finally, I decided that if I wanted to be part of a university free from drugs that damage health and scholarship, I needed to speak up. I typed and delivered a brief message to Chancellor Aldrich’s office and let my friend know that I had done so. He called her in for a talk and mentioned that her diploma in English would be in jeopardy if she participated in any further way with the drug culture around us in Orange County. Zot! No big battle – just a tiny one easily remedied.

After I left campus, I went to graduate school for a bit and lived in the Bay Area for a couple of years. But my happiest and most challenging times came living in other countries. I lived and worked in Montreal for a year and a half. Imagine trying to talk French and having people joke with you about how your French grammar is too much like all the grammar books! For four years, I lived and worked in Rio de Janeiro. I tried to teach first grade at a private school where the kids all spoke either English or Portuguese, but not both! Then I lived for 15 years in the Greater Detroit area, where a white woman teacher is always part of a minority population. Living now in Utah, I have been researching alternative medicine topics. The most important gift of my education at UC Irvine has been that I learned how to conduct research.