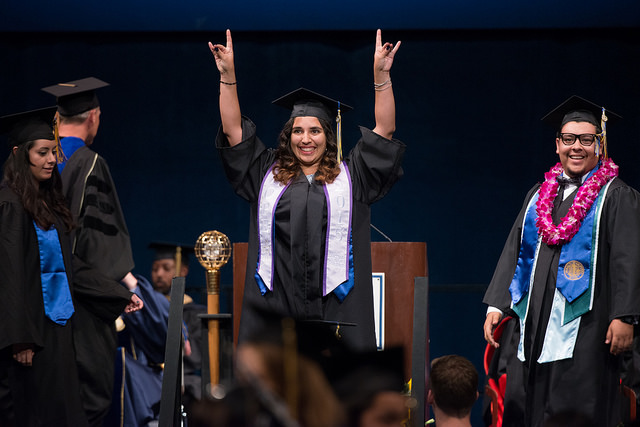 UCI’s 2015 commencement season for undergraduates concluded Monday, June 15, with The Paul Merage School of Business undergraduate ceremony. Nine other events were held over the weekend in the Bren Events Center. This year’s commencement is UCI’s 50th. At the first, 14 diplomas were handed out. The campus has grown quite a bit since, and faculty, staff and volunteers worked feverishly to make sure the 2015 festivities went off without a hitch. Here are some of the logistical facts and figures:

21,171: Estimated photos of graduates during ceremonies

93: Future doctors graduating from the School of Medicine

10: Speakers at commencement ceremonies (including Henry Samueli, chief technical officer and chairman of the board at Broadcom Corp. and Anaheim Ducks owner; and Greg Louganis ’83, four-time Olympic diving champion and UCI alumnus)

6: Average number of seconds it takes to walk across a commencement stage

5: Countries in which the most friends and family members are expected to watch the live Web stream – U.S., India, Canada, United Kingdom and Japan

5: Length in feet of the UCI Mace carried in all graduation exercises and student convocations since the UCI Alumni Association presented it to the university in 2000