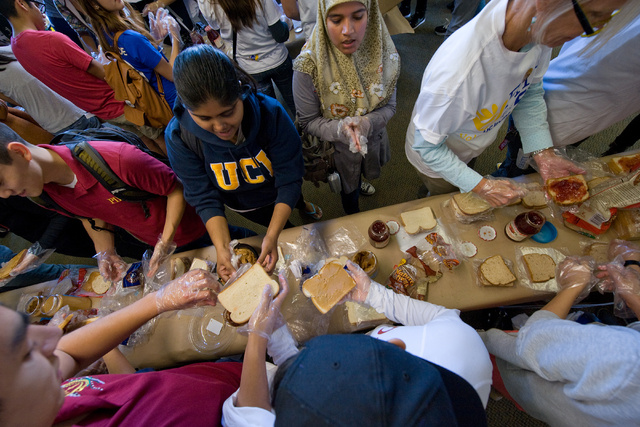 UC Irvine students, faculty and staff took 15 minutes out of their day Tuesday, Nov. 25, to stop by the Cross-Cultural Center and make peanut butter sandwiches for the hungry and homeless in Santa Ana. The “Take Fifteen” event was part of the Fifty for 50 Volunteer Program, a campaign for the UCI family to donate 50,000 hours of service time over the two-year 50th anniversary period.

And that was just the beginning. Chancellor Howard Gillman and Vice Chancellor of Student Affairs Thomas Parham will host a 50th Anniversary Anteater Spirit Rally 10:30-11:45 a.m. Thursday, Dec. 4, to announce upcoming celebrations and encourage participation in the program. Highlights will include university-themed trivia, special performances, prizes and an appearance by UCI mascot Peter the Anteater. Culminating the event, Anteaters will gather for commemorative aerial photo shoot in the Bren Events Center to spell out “UCI 50.”

Nearly 400 participants have also signed up for the annual stocking-stuffing party sponsored by UCI Staff Assembly, which will follow the rally. The goal is to assemble 500 holiday stockings for children served through the Olive Crest organization. Papa John’s and Trader Joe’s will supply food and drink for the volunteers.

Oct. 4, 2015, will mark 50 years since UCI’s first day of classes. In the years and months leading up to this milestone, UCI is hosting a series of celebratory activities with a special signature fete planned for Oct. 3, 2015. UCI officially began 50th anniversary celebrations with June 2014 commencement festivities. Coinciding with the 50th anniversary of the campus site dedication by President Lyndon B. Johnson, UCI held its 2014 commencement at Angel Stadium of Anaheim with President Barack Obama as the featured speaker. Additional anniversary events include the UCI Medal Awards, academic symposia, homecoming, Celebrate UCI, Lauds & Laurels and the annual staff appreciation picnic. Anniversary celebrations conclude with the June 2016 commencement.