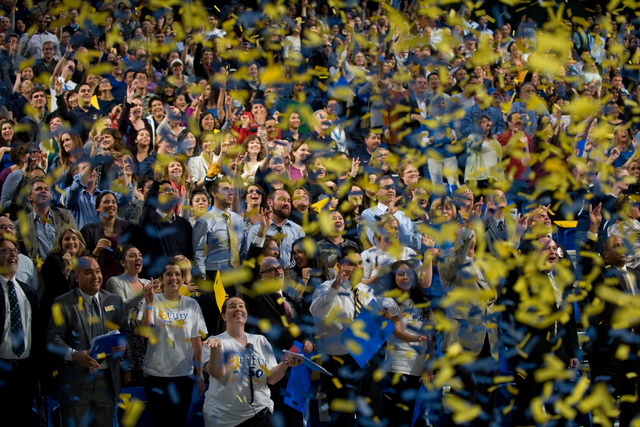 UC Irvine students, faculty and staff aren’t content with simply throwing a party to celebrate the university’s 50th anniversary. Instead, hundreds of Anteaters are rallying together to donate 50,000 service hours back into the community to honor UCI’s founding mission.

“When this campus was dedicated 50 years ago, the vision was to create one of America’s great research universities,” Chancellor Howard Gillman said. “Those original founding faculty and students – they dreamed big. They combined an unshakable commitment to excellence with a spirit of innovation. They decided that they were going to do great things not by copying their way to the top, but by embracing new ways of thinking.

“We are the heirs to that great and good project and we stand here today as stewards of a noble mission to be a force in human enlightenment and social progress,” he said.

More than 800 people gathered at Bren Events Center on Dec. 4 for the 50th Anniversary Anteater Spirit Rally, which launched UCI’s Fifty for 50 Volunteer Program. The campaign encourages members of the UCI community to personally donate 50 service hours during the university’s two-year anniversary period concluding in June 2016.

After hearing from university leadership, playing a UCI trivia game, and participating in a commemorative aerial photo to spell out “UCI 50,” more than 700 volunteers came together for the annual stocking-stuffing party sponsored by UCI Staff Assembly. Volunteers filled 988 stockings with toys, snacks and personal care products for children benefited by the Olive Crest organization, nearly doubling their initial goal.

Each hour spent helping others draws attention to a tradition of service and thanks people in the region for their support, Gillman said.

That tradition is catching on around campus. Dozens of UCI faculty, staff and students took 15 minutes out of their day Nov. 25 to stop by the Cross-Cultural Center and make peanut butter sandwiches for the hungry and homeless in Santa Ana, part of the Fifty for 50 Program. And UCI’s Transportation & Distribution Services is holding its annual Clash of the Cans food drive to benefit Orange County Food Bank. Last year, UCI collected more than 1,300 pounds of food for the organization.

“The accumulated impact of the Anteater Nation coming together, in recognition of why we exist, to serve other people will have an impact on girls and boys and men and women throughout the region in a truly extraordinary way,” he said. “What a wonderful way to celebrate our first 50 years.”

Oct. 4, 2015, will mark 50 years since the first day of classes on campus. Leading up to this milestone, UCI is hosting a series of celebratory activities with a special signature fete planned for Oct. 3, 2015. UCI officially began 50th anniversary celebrations with June 2014 commencement festivities. Coinciding with the 50th anniversary of the campus site dedication by President Lyndon B. Johnson, UCI held its 2014 commencement at Angel Stadium of Anaheim with President Barack Obama as the featured speaker. Additional anniversary events include the UCI Medal Awards, academic symposia, homecoming, Celebrate UCI, Lauds & Laurels and the annual staff appreciation picnic. Anniversary celebrations conclude with the June 2016 commencement.