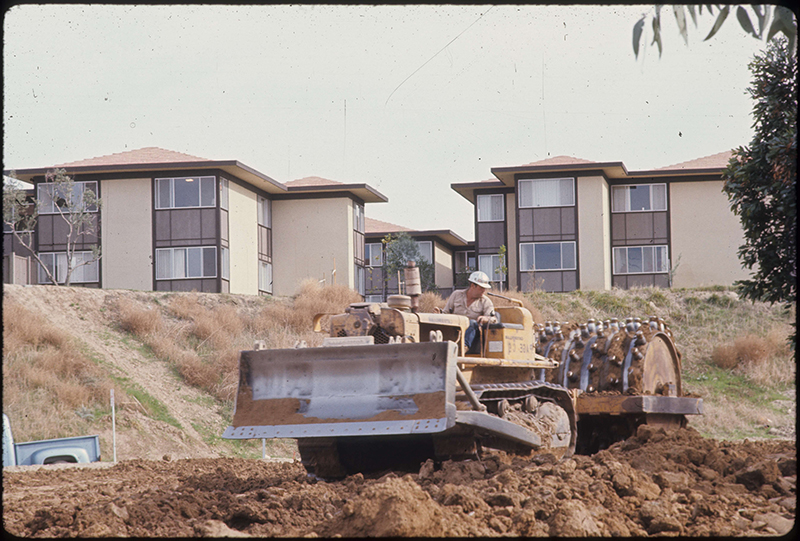 When UCI first opened, there were 10 dormitories for 500 students in Mesa Court. I moved into Viento in 1966. My room, 203-D, had a window that looked out onto hills being developed into the first addition to Mesa Court.

The water tank was located close to our window, and the ritual each morning was for the construction workers to start the large scrapers, dirt haulers and water tankers and place them by the water tank for topping off while they were warming up. This caused our room and suite to shake. There was no sleeping in late on that side of Viento.

On a whim, the idea was conceived to introduce the large earthmovers into the “flower power” age. (Remember, this was the ’60s, and flower power was just beginning to take over most UC campuses!) So one night, a small band of seven people in dark clothing made their way into the construction area with paintbrushes and water-based, wash-off paints, ready to demonstrate their artistic talents. 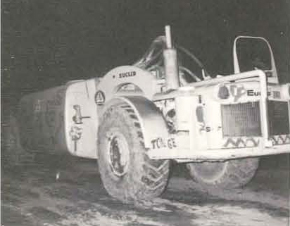 Each large wheel was decorated with a smiley face or a blossoming flower burst. Not one large piece of equipment was left untouched. The paint detail was thought to be decorative and a positive addition to the industrial behemoths that rumbled below the windows of the Viento dormitory at 6:30 each morning.

To the dismay of the budding artists, the construction company – upon arrival the next morning – did not see things the same way. It was not long before the art project came to the attention of Dean of Students Robert Lawrence. I received a phone call from him informing me that sometime during the night, the large construction vehicles had been “sabotaged,” according to the construction company. Unless they were cleaned up, a breach-of-contract action would be filed against the university. Dean Lawrence said that he thought I had a good grasp of activities around campus and that if I could get this word out, it would be appreciated.

The message managed to get to the group that created the art on wheels. And the following night, a rescue crew was formed to remove all the paint and restore the monster machines to their original beauty and form. Once again, the group, all in black, headed out after nightfall. Only this time, they carried scrub brushes, buckets and cleaning tools.

Unfortunately, the construction company had decided to lock the gates to the area at night, and a UCI police officer had been instructed to patrol the site in a 1962 Rambler, the pride and joy of the UCI police force!

When the restoration crew arrived, they found that their entry would not be as simple as it had been the previous night. It required them to climb the fence while dodging the bright headlights of the Rambler.

Sometime around 4 a.m., the last floral treatment was removed, and the group returned to the comfort of their dorm rooms to sleep a bit before classes began.

The tale is documented in the UC Eye annual for that year, and there is a band of brothers who will forever share the magic memories of the flowers on the earthmovers.