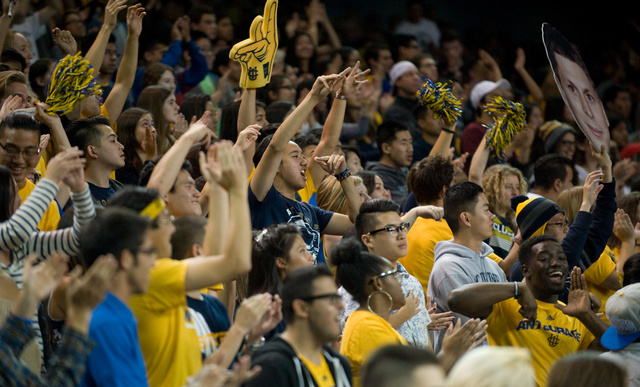 Aldrich Park was hopping Saturday, Jan. 31, as nearly 5,000 alumni, students and friends of the campus showed up for UC Irvine’s 50th anniversary homecoming.

Those attending were lured by promises of live entertainment and music, a new Anteater Reunion Corner and a Disneyland Resort Family Fun Zone, none of which disappointed.

Some of the longest lines could be found at the Hotel Irvine Beer Garden, where those 21 and older queued up for the signature Anteater Ale – a golden anniversary beer brewed by alumnus Brandon Fender ’08, co-owner of The Good Beer Company in Santa Ana.

UCI’s schools entertained alumni with “exploration programs” such as “Adventures in Physics: Quantum Circuits,” “What’s the Big Deal About Big Data?” and “Arts Alive in the Plaza.”

The evening was topped off by the UCI men’s basketball team’s decisive 77-55 win over UC Santa Barbara. Eleven of the 13 Anteaters who saw action scored, and the squad sank a season-high 11 3-pointers.

With the victory, UCI (13-8, 6-1 Big West) won its sixth consecutive game and remained tied for first place in the conference with Long Beach State and UC Davis. The Anteaters have won 33 of their last 40 games in the Bren Events Center.

“UCI homecoming rang in our 50th anniversary with a lively combination of celebration, reconnecting and discovery of the best UCI has to offer,” says Barney Ellis-Perry, assistant vice chancellor for alumni relations and CEO of the UCI Alumni Association. “Thousands of alumni were thrilled to come back to campus, and many who missed out have vowed to make it next year.”