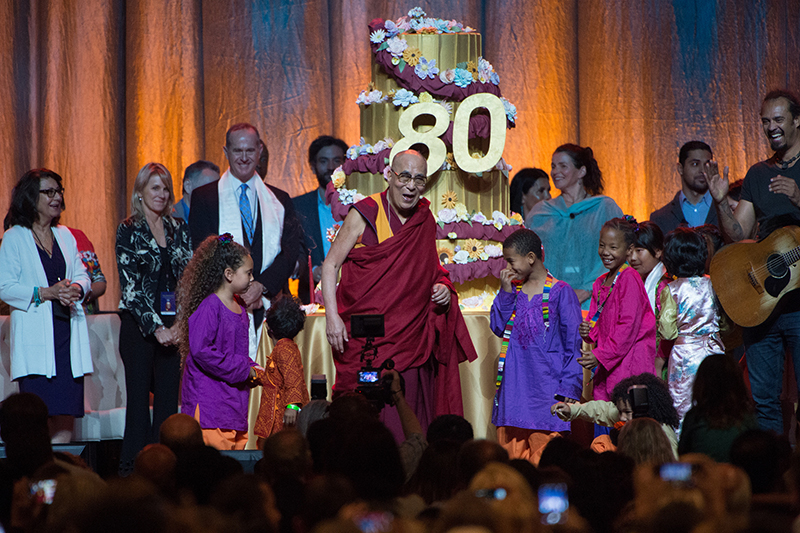 The Dalai Lama’s birthday celebration concluded Tuesday afternoon at UCI’s Bren Events Center with a panel on youth leadership and the significance of education in advancing universal human values. 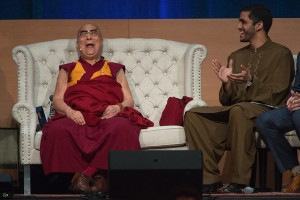 In his talk, the Dalai Lama urged the audience to embrace the values of peace and compassion in their education.

“Human progress is linked with education,” he said. “Education gives us the ability to uncover deeper human values such as compassion.”

Current and former Dalai Lama Scholars embraced the Tibetan spiritual leader and exchanged a few words before posing for a photograph onstage. UCI’s XIV Dalai Lama Endowed Scholarship was established in 2004 after the Nobel laureate visited the campus. The award recognizes students who display a commitment to ethical leadership, peace and positive global relations.

All told, more than 30,000 well-wishers gathered during the Global Compassion Summit to share in music, a mammoth cake and words of hope in honor of the XIV Dalai Lama’s 80th birthday. The exiled spiritual leader, who says every morning we awaken is a gift and a birth, seemed pleased to participate.

On Monday, thousands filled the Bren Events Center to hear the Dalai Lama, eminent scholars, and political and educational leaders address rising seas and changing climates, their effects on human populations, and the urgent need for government and individual action.

The Dalai Lama has praised Pope Francis for his recent papal document on taking better care of the Earth and asked fellow religious authorities to “speak out about current affairs which affect the future of mankind.”

At UCI, he chuckled ruefully when asked by moderator and journalist Ann Curry how best to reverse climate change.

The Dalai Lama noted that rising seas would cause the greatest suffering among the world’s poorest communities. Compassion combined with new technologies, such as desalination and solar power, could make a great difference, he said, slowing climate change while also creating jobs for those who desperately need them.

“At our best, institutions of higher education bring into the world people who are kind, thoughtful, inquisitive and analytic, who are open to new ideas and committed to the values of a peaceful, diverse, conversational community,” he said. “These are the common goals that link our university with the Global Compassion Summit.”

Curry noted that 97 percent of the world’s scientists agree that climate change is occurring and asked UCI glaciologist Isabella Velicogna for details on how fast glaciers are melting. 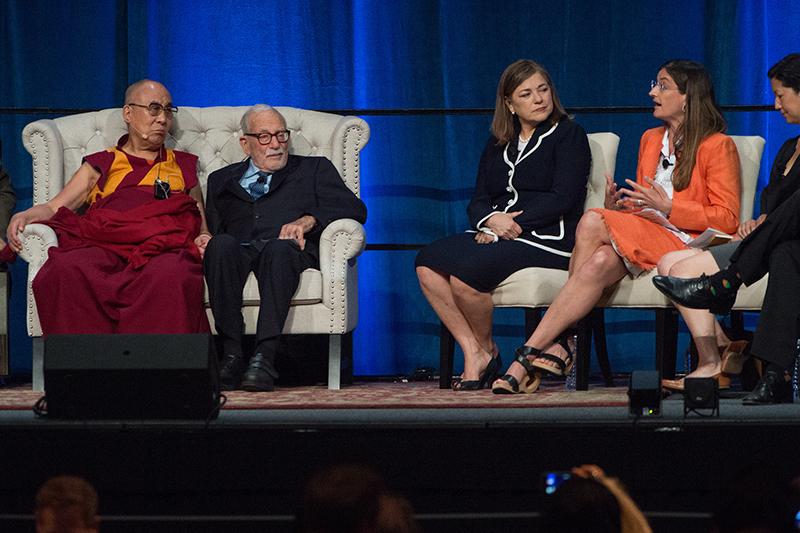 Velicogna, who uses satellite observations to track glaciers in Antarctica and Greenland, said that 40 years of high-quality data show that the world’s glaciers are melting into the oceans not slowly but “faster than we ever thought possible.” By the end of the century, she said, the planet could see more than a meter or two of sea level rise, affecting coastal populations from Bangladesh to California who may find it difficult to relocate to higher ground.

She seconded the Dalai Lama’s concerns, noting that those in parts of the world least able to handle rising seas – the elderly, children and the poor – are already being displaced from their homes and will increasingly be unable to find fresh water or food. They will also be hit hard by diseases caused by flooding and higher temperatures.

But she said that “this is the time to take action” and that solutions were possible. Velicogna added that as a teacher, she was encouraged by her students, who recognize what is happening and are taking individual action. “Young people really want to change what’s going on; they want to save the planet,” she said. “I tell my students, ‘Try to come up with a job that helps a compassionate planet but is also an opportunity for you.’” 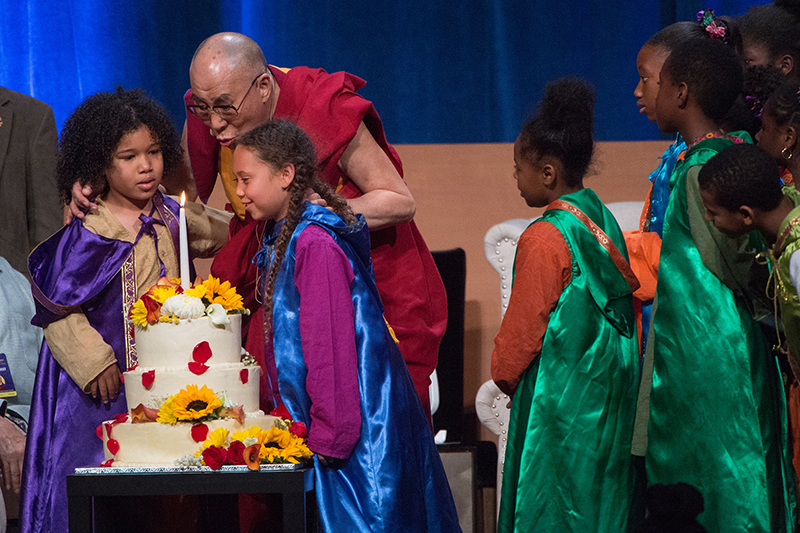 At the conclusion, the UCSD professors presented the Dalai Lama with a gift – an illustration of a newly discovered deep ocean creature named Sirsoe dalailamai because “like this species, you take very little from the Earth and give back with abundance.”

The Dalai Lama’s talk Sunday at the Honda Center followed two hours of tributes from artists, scientists, social activists and educational leaders. “I sometimes think that peace can come to the world, but not in my lifetime,” he said, “but if people really are showing such enthusiasm as this in different parts of the world, and they have the deep realization that the ultimate source of peace is within ourselves, then … it may be possible to have peace in the world in my lifetime.”

The main message of the celebration is that world peace and the happiness of humanity begins with inner peace and personal happiness. Among those sharing their understanding of that message were:

Holding the Honda Center crowd in rapt attention, the Tibetan Buddhist spiritual leader talked about the commonalities among all major religions – love, forgiveness and tolerance. The antidote to negativity and unrest in the world, he said, is to reach out in understanding.

“On an intellectual level, take [negativity] if necessary. But on a deeper emotional level, keep calm. We can do that. As humans, we can do that.”

The three-day Global Compassion Summit was sponsored by Friends of the Dalai Lama, The Center for Living Peace and UCI. 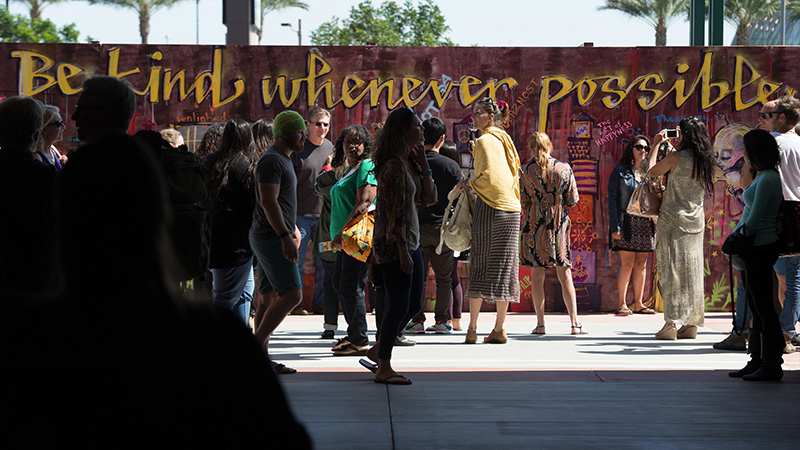