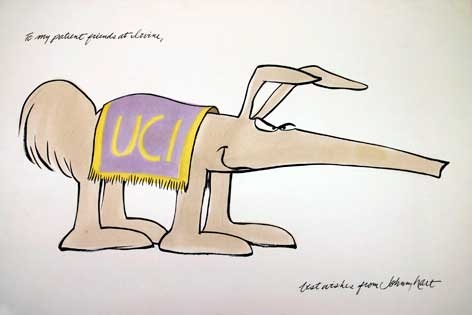 The idea for the Anteater mascot came from Pat Glasgow and Bob Ernst, two water polo players, who were inspired by the anteater in the Johnny Hart comic strip “B.C.” The two students, along with the creative marketing genius of fellow student Schuyler Hadley Bassett, organized a campaign for the unusual mascot. The Anteater was elected as the official UCI mascot on Nov. 30, 1965. It received 559 votes, beating out such alternatives as Seahawks, Bison and “none of these.”