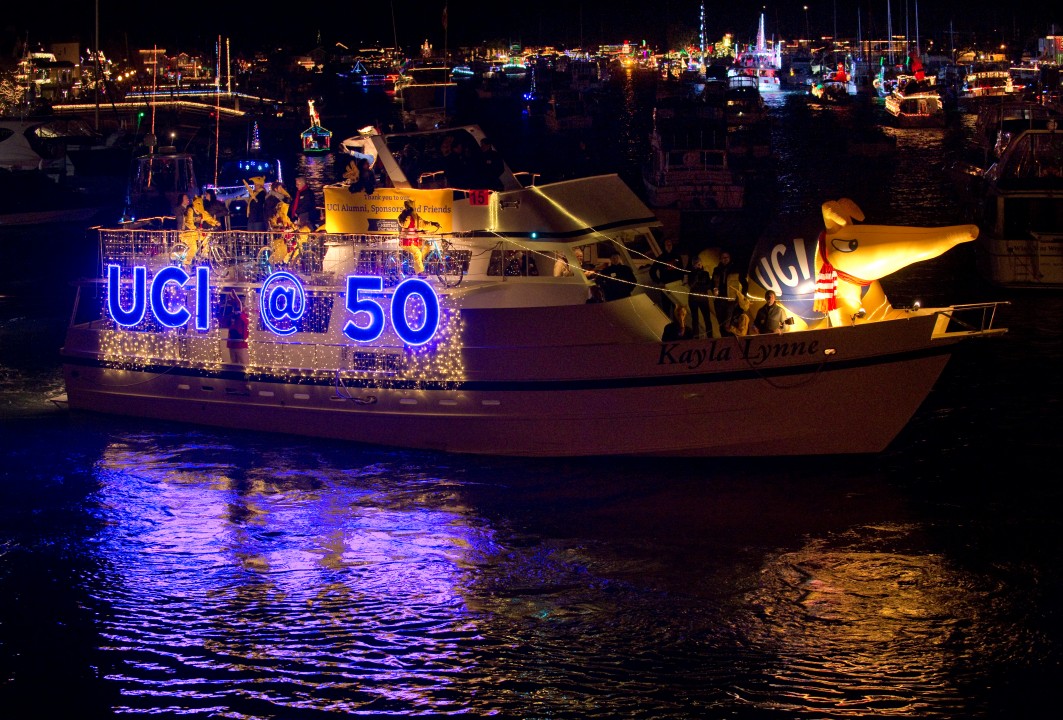 Faculty and staff of the Claire Trevor School of the Arts also produced and performed holiday-themed music. Alan Terricciano, professor of dance; Men in Blaque, directed by  Joseph Huszti; Bobby Rodriguez, Nicole Mitchel and Kei Akagi, professors of music; and Norman Beede, senior musician and director of dance accompanists, all got in on the act.

Funded by alumni donors and friends, the entry highlights the university’s commitment to sustainability. Students wearing anteater masks pedal stationary bikes connected to generators to power the boat’s lights. A giant, inflatable likeness of Peter the Anteater keeps watch on the bow, while the live mascot himself – sporting a nautical outfit – waves to onlookers. Jesse Colin Jackson, assistant professor of art in UCI’s Claire Trevor School of the Arts, designed the yacht’s decorations, and his students helped execute the plan.

“My research group, which volunteered to create and build the design focused on the 50th anniversary, is fundamentally concerned with merging technology, creativity and sustainability,” Jackson says. “We decided that running the lights from bicycles would not only align with our campus’s renewable energy initiatives and the UC system’s 2025 carbon neutrality goal, but also just be so cool!”

UCI is one of about 80 participants in the parade, which helped earn Newport Beach a spot in Frommer’s list of the World’s Best Holiday Lights: 10 Decorated Cities.