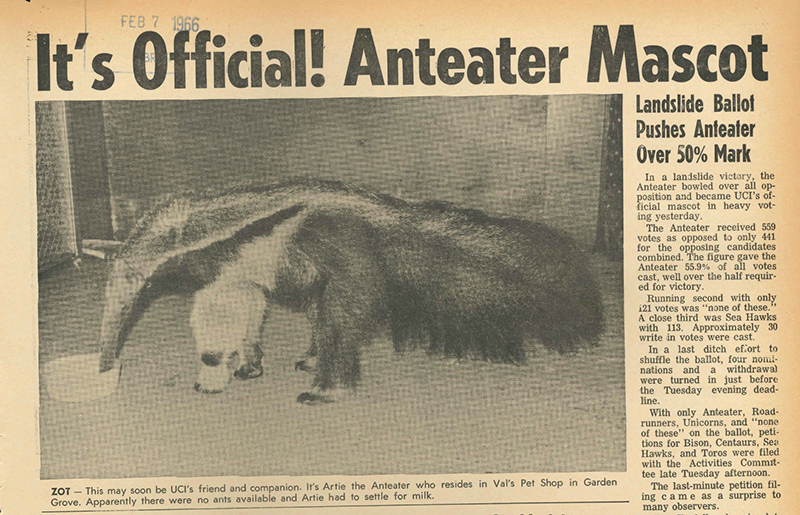 “It was right down here,” he says, standing on a now-shaded portion of what is now Inner Ring Road, below the Gateway Study Center. “This was where everybody met, because this was the only place that was here. Everything else was pretty much dirt.”

Back then, there was no Aldrich Park, no circular path, no tall trees – just first-ever students at the nascent University of California, Irvine campus determined to create their own identity.

That included their choice of mascot. Peter the Anteater, whose half-century birthday is celebrated this month, was an improbable selection. But to Grayston and his peers, that Nov. 30 vote was a significant decision.

“Students at UCI wanted to set their own mark,” he says. “Having an anteater as a mascot may seem like something frivolous, or even silly, but it was not. It was hotly debated. When people started to think about it, we were going to establish a brand-new university with its own culture. We were not going to be a Berkeley or UCLA knockoff; we were going to be UCI.” 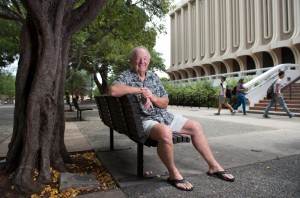 To him, that meant combining high-powered academics with casual innovation. This was the mid-1960s, after all.

“It was a period of time when we wanted to establish traditions that were different,” he says. “We did not want to be a bruin or a golden bear.”

Grayston doesn’t recall who suggested the anteater, based on the popular figure in the “B.C.” comic strip, but he sure liked it. It was a perfect fit with the independent mood of the student body and a readily recognizable icon of the time. Student organizers obtained permission from the strip’s creator, and the movement to make the fuzzy, long-tongued beast the campus totem gained momentum.

Others were put off by the anteater’s popularity. “We all knew at the time [that Chancellor]Dan Aldrich didn’t support the idea, and the regents thought it was just a dumb idea,” Grayston says.

The fledgling student newspaper covered the matter extensively the week before the election: “In what has proven to be the most controversial issue in UCI’s short history, students and faculty will go to the three polls in gateway plaza … beginning at 9:00 a.m., to vote on the school’s mascot.”

Letter writers and columnists largely favored the whimsical South American animal. “Dear Editors,” wrote Robert G. Ernst II. “The ANTEATER lends itself to cheers and the like, for example, ZOT. In keeping with the ANTEATER spirit I feel the name of the Commons is too common and should be changed to ‘The Ant Hill.’ This may very well usher in a whole new series of Anteater jokes, i.e. an icebox is an ‘antifreeze’; when you get married, you ‘antelope’; a person looking for seat at a basketball game is an ‘antecedent.’”

Opposing freshmen petitioned in vain to add more august choices. Others with even more fanciful ideas had better luck. Joining the anteater on the ballot with the required 100 signatures each were the roadrunner, the unicorn and “none of these.” Missing were the alligator, the bearcat, the mariners, the golden eagle and the centaur, all lacking enough signatures.

Amid furious politicking by opponents who wanted a “worthy” choice, Grayston recalls, one factoid helped sway undecided voters. It was learned that the anteater was also known as the antbear and was related to North American ursines. For those who wanted to maintain the UC state bear symbolism, this was a unique way to do it.

Grayston recalls that he and hundreds of fellow students gathered on the path below the Gateway Study Center after dark beneath loudspeakers, waiting for student leaders to announce election results. There were two other measures on the ballot that seminal semester: whether to have a football team and whether to have fraternities. Grayston’s votes, like a resounding majority of his 1,500 classmates, were an emphatic no to football and fraternities and a big yes to the long-nosed, pigeon-toed mascot. Fraternities have since been established, but UCI still has no football team. And Peter the Anteater has been going strong since that night in 1965.

“Everybody voted, and – bam! – it was the anteater!” Grayston says. “We were all so excited; we were really jazzed.”

In an extra edition the next morning, the campus newspaper proclaimed: “It’s Official! Anteater Mascot” and “Landslide Ballot Pushes Anteater Over 50% Mark.”

The story read: “In a landslide victory, the Anteater bowled over all opposition and became UCI’s official mascot in heavy voting yesterday. The Anteater received 559 votes as opposed to only 441 for the opposing candidates combined. … Running second with only 121 votes was ‘none of these.’” 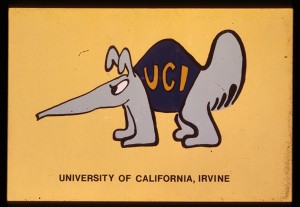 “Be Patient! 1000 ZOT Buttons are on the way,” a box proclaimed. A sidebar examined the mascot situation at other California campuses, and a sports columnist wrote, “With a mascot to yell about, the cheerleaders are working feverishly to prepare yells for the basketball game against UCR.” Beneath that, an ad for Squires Retreat nightclub in Santa Ana read, “Welcome Victorious ZOT People.”

Grayston went on to graduate school after UCI and had a long, successful career in chemical and pharmaceutical research and development. For him, the mascot decision has lived up to its full potential, helping to put UCI on the map. On a recent visit to campus after several decades, he marveled at the new construction, the leafy sycamores – and the bronzed anteaters outside the Student Center.

“When I look at these towering trees, all these buildings, I see a real university. We were the beginning of something new and very special,” Grayston says. “Having something like the anteater for a mascot was new, just like the school. Nothing like UCI existed at that time, and this was really an expression of the fact that all the students understood that we were new, we were different.”

Images provided by UCI Communications; AS-061; and Spectrum. Publications from the University of California, Irvine and Special Collections & Archives, the UCI Libraries.