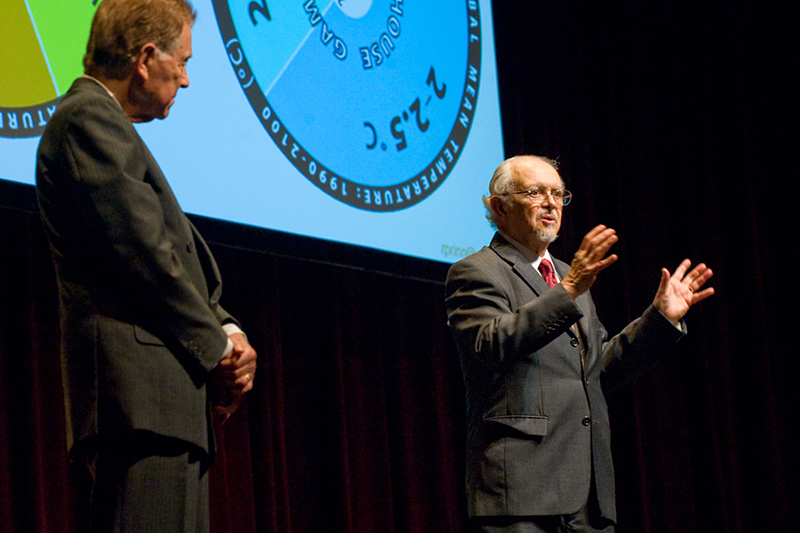 Nobel laureate and former Anteater Mario Molina received a hero’s welcome Wednesday, Oct. 28, when he took the stage at the packed Irvine Barclay Theatre. It was a fitting tribute for a man credited with, oh, just saving the world.

His talk, “Science & Policy of Climate Change,” was sponsored by the Francisco J. Ayala School of Biological Sciences as part of the University of California, Irvine’s 50th Anniversary Academic Symposium Series. In a wide-ranging, hourlong presentation, Molina provided behind-the-scenes details of his early work with UCI’s F. Sherwood Rowland – for which they later won the 1995 Nobel Prize in chemistry – and discussed his current passion: promoting global policies that combine sustainable development with vigorous economic growth.

As a postdoctoral researcher collaborating with Rowland in the early 1970s, Molina helped prove that chlorofluorocarbons, then a ubiquitous chemical in aerosol sprays and refrigerants, were playing a role in breaking down the planet’s stratospheric ozone layer. Their first paper on the subject almost didn’t get published.

Scientific journals take a dim view of findings showing up in popular media before publication, and that’s exactly what happened when the research was shared at a meeting of scientists in Sweden that was also attended by a reporter.

“So the news broke in a Swedish newspaper,” Molina recalled, “and we were here thinking, ‘Gee whiz! Our paper won’t be published.’ Fortunately, the newspaper was not well-known, and our paper was published.”

What followed was more than 10 years of journal articles, advocacy, and vilification by industry leaders and politicians. Even NASA, which had flown satellites over the Antarctic ozone hole, was skeptical. It hadn’t detected a drop in ozone levels.

“It turns out,” Molina said, “that their satellites had been programmed so that if they found less than half the amount of expected ozone, the data would be ignored as a mistake.”

On Sept. 16, 1987, the research team was vindicated by the Montreal Protocol on Substances That Deplete the Ozone Layer, an international treaty phasing out the use of CFCs. Eight years later, the Nobel committee credited Molina, Rowland and Paul Crutzen – who studied the effect of nitrogen in ozone depletion ­– with saving the world.

Molina left UCI in 1979 and went on to NASA’s Jet Propulsion Laboratory and then the Massachusetts Institute of Technology. Currently a Distinguished Professor of chemistry & biochemistry at UC San Diego, he serves on President Barack Obama’s Council of Advisors on Science & Technology and spends much of his time in Mexico City running Centro Mario Molina, which is involved in the politics of climate change.

Molina’s steps for limiting the global temperature rise to no more than 2 degrees include:

“The risk is 1 in 5 that we’ll have a huge disaster on our hands if there is no change,” he said. “Climate change will cost more than we can measure in dollars, and beyond that is the ethics of leaving a planet to future generations in which it’s harder to get to the same standard of living we have now.

“We can say, ‘Let our grandchildren worry about it.’ But it’s harder to change later. I make the analogy of education: People invest in their children’s education, even though it doesn’t pay off for decades. Why not the planet?”